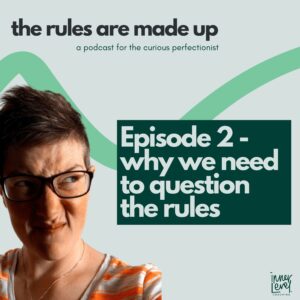 Tune into Episode 2 – Why we need to question the rules, right here in your browser, find it on your favourite platform (head here for the links) or keep reading for a transcript.

Hi hello, how are you doing?

I am so stoked to have you tune in to this episode of the Rules are made up.

Today we are going to talk a little bit more about the rules, and actually what they are and why I believe we need to question more and why I’m saying that a lot of them are made up as the name of the show suggests.

Before we get going, I do want to add a disclaimer or a comment of thoughts that we will obviously not be talking about things like laws and regulations that exist for good reason to uphold democracies and society and you know, help us live our lives in the 21st century, but what I will say is that we certainly also should be questioning those there are different forms and ways to go about that though, and this podcast is not one of them.

I also want to acknowledge that for some of you, those laws and regulations or the history of how they came about or you know what they were previously may well have contributed to some of the rules and shoulds that you’ve learned over time and I also want to acknowledge that because I am speaking from a place of a fuckton of privilege and for some of you, you know I’ve not had to navigate certain situations, which makes me feel safer and puts me in a different position to be able to question these things or to be able to challenge my own thinking.

So if that is, you know, if some of what we’ve just talked about is you, please take from this what resonates and leave what doesn’t.

But I did want to acknowledge the fact that some of what we talk about and not just this episode, but also the rest of the show there is inherent privilege in some of the things that we’re able to talk about because of the privileges that we hold.

Now what are the rules and the sheds and the things that I talk about in that I refer to on the show?

The rule and the shoulds are the things that, the standards and the expectations that we live our lives by.

That we don’t even know, a lot of the time that we’re doing that.

And it’s things like believing that we have to work out a certain number of days or that when we start our career in one area or industry that that that’s locked in for life and we have to stick with it no matter what, and that we cannot change it.

Or that we you know you have to go to university or we have to – it’s all the have to’s that can show up in our lives and in some cases again that may be completely valid that those are have to use that I’m generalizing a lot of what we’re talking about, so some of these things may well not apply to you but unless we’re having a one on one conversation, please take some of what we’re saying and what I’m saying with a grain of salt, although you should always take it with a grain of salt to be fair, no matter the context, but some of these things might be overly generalized, and you may well have things in your life where you can’t quite, you can’t question.

You can’t challenge your own thinking, or someone else is thinking, but again, similar to what I’ve just said before, take what resonates and leave what doesn’t.

Back to the rules and the shoulds and the have tos.

The reason I called this show, the rules are made up and the reason I want us to question them is because I don’t believe a lot of us even know that we are following, or we’re living by these rules and shoulds.

And I just want to bring awareness to that.

I just want you to go well, yeah, like doing these things and I don’t really know why I’m doing them that way.

That’s what I want to get out of this show.

That’s what I want to get us thinking more about and.

Figuring out did I actually set this expectation for myself?

Did I create this rule that I have to do something in a particular way, and if you did – great, and if it’s helping you. Awesome, that’s fan-fucking-tastic.

Then that’s where we want to dig in more. Using a personal example, starting my business at the very beginning, I had this expectation and idea my head that kind of turned into a rule or a should of needing to be able to quit my full time job within a certain amount of time, because that means that you know I’ve grown my business successfully and don’t need two jobs.

That’s a totally valid goal for a lot of people. OK, I’m not poo-pooing this goal, it’s awesome.

There’s many, many business owners that have, you know, grown their businesses in a short period of time to that level of, I don’t know growth/scale, whatever.

I’m not one of them. And right now, at the point of recording – I don’t even know if I want to be.

I don’t I actually, I know some of you I might be working with you if you’re listening.

I like working with you. I like some of the stuff that we’re doing so I don’t have this sense of, you know, having to run away for or having to make it work because that then also, and that’s partly again why I want us to question some of the things that we think we should be doing is if we, if we believe that we should be doing things a particular way, or that you know certain like going into a particular goal or, you know, got like things like growing this business or even training for a race.

Or you know any other kind of goal that we set – we believe it has to have this particular path, and of course that path has to be freaking straight, right?

Which is not how this shit happens (laughs)

But we believe that we have to follow this particular path, and in some cases you know it’s a path that’s already laid out.

And if we don’t do that – that’s scary as hell.

Or it means something wrong.

It’s about figuring out cool, what do you want to do?

Why are you doing it? Like why is your goal the goal (and we’ll probably talk about goals and goal setting in another episode too)

Figuring out why we’re going after something and then figuring out:

What are the rules or what are the different things that we think we have to do in order to get there.

And are those have to’s actually helpful?

Because maybe they are. And so we can keep doing that.

I’m not going to say you have to question and undo everything.

I’m saying question the unhelpful things and maybe start to tweak and change some of those.

That’s what we’re here for.

If it’s moving you forward, if you know some of the rules or the expectations or the shoulds that you’ve got popping up in your life, if they’re moving forward towards where you want to be, keep doing it!

But if they’re not – adjusting those rules and shoulds, challenging your own thinking is a good thing to be doing and I think we need to do it a lot more (I’m using the word think a lot in the show [laughs].

Because it means you are taking in additional information as you’re going,  as you’re taking action and you are tweaking and making changes because of what you’re learning, and that is what growth or going after a goal, that’s what that is all about. That’s what improvement is about.

You reflect, you assess, you adjust.

You learn and you just keep doing it.

It’s just this little continuous loop of doing that, because you’re always going to receive more information and new information. And you won’t know everything when you start out too.

And that goes for the rules and the shoulds as well.

You know, maybe five years ago you were single, living by yourself, had you know heaps of time to go to the gym for like 2 hours or whatever…

And five years later – you have a partner, maybe have a baby and your life looks completely different.

If anything, I just want to remind you of that and to just, you know, pause and reflect and challenge your own thinking every so often.

Doesn’t even really have to take action from it, at least right away.

It really just is about pausing and reflecting and challenging you your own thinking.

This brings us to the end of this episode.

Thank you so much for tuning in before I officially sign off – I do have one favor to ask or I want to ask for your help and that is:

I want to hear from you and I want to learn what rules you have showing up in your life that you’re like ‘ooh, maybe I need to help meet some help question’

I have a list of rules that I’m going to talk about, but I do want to make this show as helpful as possible for you listeners too so if we’re already connected on various social media platforms, I would love if you can message me and chat to me.

Otherwise you can always email me at neens@innerlevel.me

I’d love to talk about specific examples as they apply to you so that this can be a really really helpful tool for you.

Find the podcast on Anchor