03 – Labels and why we should challenge those too… 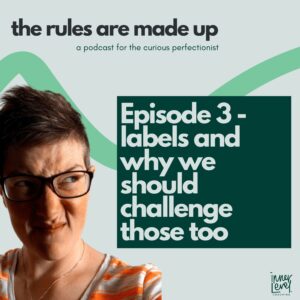 Tune into Episode 3 – Labels and why we should challenge those too…, right here in your browser, find it on your favourite platform (head here for the links) or keep reading for a transcript.

Hi hello, welcome to this episode of the Rules Are Made Up.

Today we’re going to talk about the rules when it comes to labels and descriptions and you know things like job titles that fun, interesting stuff.

Now what do I mean by labels when I say that?

Labels are what we call descriptors of something or someone.

And they exist for a reason because our brains like labels

It’s a way for our brains to stay in control because we can easily articulate what something is.

But, and it’s a big BUT they can also be really limiting because we can use certain words, a particular language to kind of get in some judgment into how we’re describing them because of the words that we use.

Or because of how we describe someone, it can start to generate bias, but on the other end, for the person that is receiving the description.

I know that it might have been a bit confusing, so I’ll explain what I mean:

There is this this theory in psychology called labeling theory and that basically means that by describing something or someone in a particular way, we shape the thoughts of the person receiving the description.

There was an experiment, and there’s probably been heaps…

The one I read up on was an experiment where they portrayed a guru, a young girl playing in the street and then recorded her talking about some stuff like reading out sentences or something like that.

And they showed the information and described her to two groups of people, and for one of those groups they described her as living in a lower socioeconomic area.

And for the other group of people, they described her using, you know, saying she lived in a more affluent area of town.

And then after the fact they asked all the participants to rate her cognitive performance in the video you know how was she doing?

And I think you know where this is going.

And even I think this experiment is quite old. I think it’s like 40, 50 years old. I’ll find the link and I’ll chuck the link in the show notes if you are a geek like me and want to read up on it.

But what I think this was really is really powerful in showing is how we, but just by the words we use, we chuck in this inherent meaning of what we’re describing.

Even a lot of times these days, we don’t even know that that’s what we’re doing that we might not be doing it on purpose or deliberately.

But we can set up what we’re wanting to say, or by choosing particular labels over other words, over other labels.

Right, a common one that is everywhere (and that I just if this could die I would love it) is using good and bad to describe foods.

Food has no inherent value. Food is food.

I mean, sure, we exchange money for it most of the time unless we grow our own, but it has no inherent value.

Is it more nutritious or are there foods that are more nutrient dense than others? Of course. Of course there are. That’s not what I’m saying.

What we’ve done by calling foods good or bad is applying a label, applying meaning and applying value to something that actually inherently has no function value.

And again it just goes to show how powerful labels and language can be.

And it can also be something that we struggle with, right?

Because it’s so powerful, for the longest time personally, I’ve struggled to really figure out what to call myself.

Because what I do on this show and what I do in my coaching practice is probably a hybrid of a lot of things like mindset coaching, mindfulness coaching, life coaching, you know if I talk to clients about their sleep and their stress probably even a bit of health and wellness coaching in the mix.

All of those things are facets of what I do, but I’ve struggled to really chuck one label on it, because it means certain things to certain people, but it might not necessarily be what I actually mean.

And you know the same goes at work. I’ve got a particular job title, it’s called I’m an agile coach and that has a particular meaning to a lot of people, is it what I actually do most of the time?

No, probably not. I mean certainly some days it is. But there’s also days where you know you could call me a continuous improvement consultant or something, but there are so many other things that I do that that that you know 2 words or three words as part of a job description can’t really summarise.

What I wanna do as part of the show as you know is challenge ourselves, challenge our thinking as to what we believe in and what we what we do.

The thing that that person put forward was you know “does that actually matter? If we get to the outcome that we want, if we get the end result, does it matter what we call it?”

And I want to put this question to you if you are someone who you know who’s in the market for a coach or you know any other kind of professional, really, but obviously I am a coach, so we’re going to talk about coaching on this podcast.

Do you care what they call themselves?

Or you might you know if they have a podcast you listen to that – if you resonate with what they’re saying, do you really care what they call themselves?

Or if they call themselves something really not necessarily weird, but something that you haven’t really heard of before.

Does that make you think twice whether or not you want to keep checking them out?

Obviously I’m not expecting answers here, but I think it’s something powerful to ask ourselves, right?

Where the labels show up in our lives.

And what we use to describe ourselves or other people with as well.

Because it can be incredibly, incredibly powerful.

That’s all I have for you today, thank you for tuning in and I will chat to you again soon.

Find the show on Anchor

The article I reference in the episode on Labelling Theory