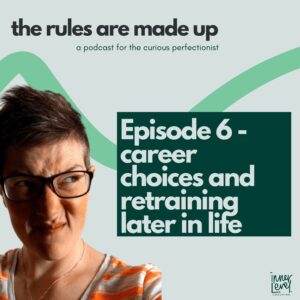 Tune into Episode 6 – Career choices and retraining later in life, right here in your browser, find it on your favourite platform (head here for the links) or keep reading for a transcript.

In today’s episode, we’re going to be talking about rules when it comes to careers changing careers, being “too late” or doing it later in life and any and all constructs and rules that may show up as it relates to our careers.

I will go on the record now and say that just because you studied one thing does not mean you have to keep working in roles, in jobs that align to that, if that isn’t what floats your boat.

You may have studied something because it was fascinating and interesting to you at the time, but you are human and you change. And your opinions change and what you might be interested in and fascinated by will also change.

Let me give you a prime example to illustrate my point:

I went to university ages and ages ago and I studied marketing. I graduated with a degree in marketing and a minor in commercial law.

My current role being an Agile Coach and also running my business on the side, I’m using a little bit of that I guess, especially the marketing part.

A lot of the things that I learned I don’t really apply anymore. Doesn’t mean my degree was a waste of time. Doesn’t mean I am shit for changing my mind.

It just means I lost an interest in marketing, probably because I didn’t end up getting a job straight out of uni where I could apply a lot of what I had learned during my degree.

I graduated, I finished pretty much at the height of the recession back in 2009 (that ages me).

And I just tried to get whatever job I could, right, I ended up in a recruitment agency – first as a bit of an admin-y all around person and then towards the end of my time there I was working with a lot of the candidates helping them and supporting them during their job searches.

And actually that time in recruitment because it was focused on technology roles really stoked my interest in learning more about technology and software and all the geeky stuff and it ended up getting me a job in an IT department as a service desk person, the good old you know “have you turned it off and on again?”

That was me for a while. And over years and years of, you know, going through a couple more jobs in technology, it got me to where I am now.

So if I hadn’t gotten a role that I sort of didn’t really want that didn’t really align with what I’d studied, maybe I would be working in marketing right now.

Maybe I’d still, you know, come to the same conclusion that I’m really fascinated by psychology, which is probably partly why I studied marketing in the first place.

I might not be in the position that I am in today if it hadn’t been for actually not really following the career path that I thought I would.

Now, I’m not saying changing your mind isn’t scary. Because it is. Especially when you’re trying to go into a direction that you’ve not been in before.

That is unfamiliar, that is new, that is unknown. That shit is fucking scary.

And staying where you are with what’s familiar, is safe and our brains want us to be safe.

That’s literally what a big part of their job is. But at the same time, there’s this, you know this feeling of -if you’re uncomfortable where you are right now. And you have a bit of that that oh shit moment where you realize that you’re kind of feeling pulled in a different direction? That’s OK!

And you can use all of that information to make a decision to move into a different or even still related direction. What I’ve realized over the last few years of working in the roles that I have is that I really enjoy working with people, supporting them in making change.

Whether that’s you know, in my role at work and in delivering change and doing that in a more effective way and helping my colleagues you know question how we’re doing things and maybe doing differently and also supporting them with you know systems stuff to help them get there.

Right, and I’ve really enjoyed a lot of that so much, that I wanted to formalize my education.

And I’m not saying that like online certifications or stuff like that doesn’t count, it does. But the more I talked to my clients, the more I even talked to people at work and the more I’m, you know, I’m the client in my own therapy sessions. I’ve also developed an interest and a passion to talk about mental health and mental wellbeing.

And as part of formalising my education, I am legitimately considering taking it as far as qualifying or being able to register as a therapist or a counselor over here and then maybe making that part of what I do. I have no idea yet what that might look like, but I know it’s something that very much interests me.

I’m in my mid-thirties, I’ve gone over the threshold where we’re closer to 40 now than we are to 30 so does that matter that I’m making this decision at this point in time?

I don’t fucking think so.

Who says and this brings me to the other part of what I wanted to talk about in this episode.

Who says that we have to figure out what we want to be working in for the rest of our lives when we’re freaking 20 or 18 or whatever time that most of us go to university or college or whatever it is ’cause it changes in different countries.

Who says that we have to have it all figured out then? Just because that’s how things used to be, doesn’t mean they have to still be like that.

Is it harder to retrain when we’re a little bit older and to maybe, you know, forge new careers or find new roles? Absolutely, but that’s also because there’s a bit of a bias still around that you know, we shouldn’t be doing that.

And I’ll say fuck that – we totally should!

I would rather go back to university and work in a role in an environment that fulfills me than somewhere I loathe to be, where I hate, you know, waking up in the morning and logging in or actually commuting to work. What kind of life is that?

And I’m not saying, by the way that that’s current state – it’s not, I actually really enjoy my current role!

But if you don’t – it’s OK to entertain the idea, even to begin with, you can just entertain the idea of figuring out what you’re really good at and what you enjoy doing and seeing if there are roles and opportunities in that space.

Because a lot of especially if you’ve been in the workforce for a while, or even if you’ve run your own business (any and all applies here).

You will have developed skills that you can transfer to whatever it is that you want to be doing.

Like I’ve learned, a lot of troubleshooting skills and my sort of more hands on techy roles because that was literally my job was to troubleshoot and talk other people through it in some cases.

And I think that’s where I got part of my challenging, You know, it’s like “what’s going on? How can we, you know, let’s try this thing and see if it works and if it doesn’t, let’s try this other thing”

That’s why I got that from and that’s what helped me understand that actually it’s OK to try a few different things and experiment.

You will have similar skills to0, not necessarily the same, but you will have things that you’re amazing at that, for example, someone else isn’t. So maybe part of what you could do is go and support them.

Right, like there’s business owners, for example, that are awesome at thinking about the vision and the direction and you know all the exciting like thinking, thinking up all the new stuff.

But I don’t have, you know, any dependents or anyone else relying on me other than myself and hubby to a degree but we’re also kind of independent, right?

There is privilege in a lot of what I’ve just talked about. But that doesn’t mean that you can’t start challenging you’re thinking and query your thinking and see what comes up.

Just because you’re entertaining these ideas with these visions or dreams or whatever it is, does not mean you have to take action.

You can, of course, but you don’t have to.  I’d love it even if you just challenge your perception of your career, and if it’s really something you enjoy. That’s enough – for now. And especially if you do enjoy it, if you’re like “I’m in the job that I would not change it for the world” – that is amazing!

And if you’re not, maybe this just planted a little seed to figure out if there is something else out there And as much as I’ve been talking about safety, if you need safety right now – then I’m not saying like I’m not at all saying you should be quitting your job here. But maybe just start thinking about whether or not eventually that’s something you might want to consider – when you’re in a position to do that.

That’s all I’ve got for today’s episode, I think these are going to be quite short and sweet the way we’re going. I hope you got something out of it and I’d love to connect with you on social media wherever we’re connected, I’d love to hear if you yourself have retrained.

If you’re in the career that you’ve always wanted to be in, or if you studied one thing and you’re in a different career or even if you studied at all ’cause there’s actually also totally fine.

Some of us are in jobs and careers without really having studied something, but we still enjoy it.

So I’d love to hear from you and connect with you on social media and all the links you need are in the shownotes and I’ll chat to you soon.