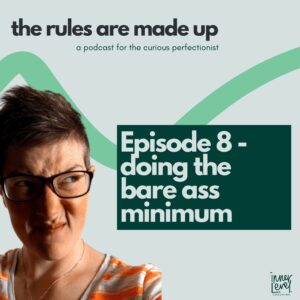 Tune into Episode 8 – Doing the bare ass minimum right here in your browser, find it on your favourite platform (head here for the links) or keep reading for a transcript.

Hi, hello and welcome to another episode of The Rules Are Made Up.

Today I wanted to talk to you about a concept and a tool that is very topical for me at the moment and it may be of use and of help for you as well and that concept is the concept of the bare as minimum. I may have mentioned this in the episode where I talked about the continuum meter, because basically the bare as minimum is one end of that continuum.

But what it really means is to have an idea of what just the basics, the non-negotiables – literally as it says the bare minimum – what that is for you in various areas, various goals so that you can keep moving and keep pressing on when life gets lifey, when shit happens, when you’re not doing so well, it’s just a really handy helpful concept to have on hand. It’s a tool that will help you manage your mind and get self-talk that comes with not always being able to do everything the way that you had originally envisioned, or that you want to be able to do.

Right case in point and a very personal example, if you paid attention over the last minute and a half, you may have heard some puppy noises in the background because we brought home our puppy Chewie over the weekend. He’s named after Chewbacca from Star Wars (yes, I’m a bit of a nerd), but he’s definitely also living up to the other meaning of that word.

Even though I want to do a lot of workouts (because I like being active), so far since he’s moved in my sleep hasn’t been that great, so I’m totally OK that this week I’ll mostly do walks.

Can’t take him yet unfortunately because he’s too young and hasn’t had all his vaccinations but I’m looking forward to taking him, but even so, running around in the yard with him also movement right?

No matter how fucking small that is right, it could be walks instead of workouts if that’s all you have time for that or you have energy for with business for me personally for example, my bare as minimum are a couple of other tasks as well as recording this podcast.

And if I get additional things in that’s awesome, but those are basically my non negotiables right, those  are things that I want to do to keep it moving.

But it’s also OK that it’s not exactly how I envisioned, right? This episode is going to be incredibly short because I’m literally just explaining what BAM is and then giving you some examples.

And that’s OK – that is my bare as minimum version of being able to record a podcast episode this week and getting it out there, even though it’s later than I usually would have wanted to publish it.

Those are just some arbitrary rules I made up and I talked about that last week too, right, so think about where life has gotten lifey for you lately, where you’ve had shit happen or you’ve just had stuff beyond your control happen and what are some of the things that you can take control of that you can do that aren’t necessarily going to tax you out the wazoo that aren’t going to require you to put in a lot of effort or a lot of brain energy, but they will still keep you moving forward.

That is literally what barriers minimum is about.

So with that being said, we’re literally at the five minute mark and that is all I wanted you to hear from me this week is the concept of the bare as minimum and the fact that it’s ok that some days or even weeks that’s all you’ve got in you and that’s fine.

You can totally have BAM in one or two areas and go super hard out in other areas.

When I am super hard out bonding with Chewie this week (and for the next few weeks probably) and that means I’ll have to address the bare minimum things in other areas like work, study, my business and my movement and that is totally OK because I’m going into it knowing that’s the approach I’m taking.

That’s all I’ve got for you today, I hope this episode helped.

If you want to connect, reach out to me on Instagram or LinkedIn or wherever else we’re connected the details at all in the show notes and I’ll chat to you again soon.