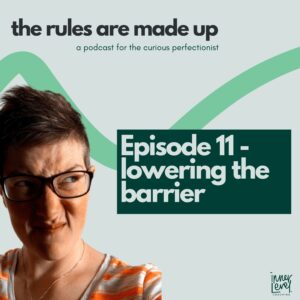 Tune into Episode 11 – Lowering the barrier right here in your browser, find it on your favourite platform (head here for the links) or keep reading for a transcript.

Lowering the barrier. I’m not sure if you have heard about this saying before, if you haven’t, it basically means what it says 😊

But it’s often used to, I guess, describe how to make something easier right when we’re lowering the barrier, we’re making it easier or we’re removing blockers or impediments to being able to do something or even to start something.

A common example and a common I guess scenario that where that can show up is working out for example right because we have this idea that our workouts have to be an hour long and we have to sweat like crazy and due at the end of it and lowering the barrier can look like being OK with less than that.

But it can also mean getting started when we’re not feeling like doing something and by lowering the barrier to still do something, or by removing the construct of that idea of perfection in our head, we give ourselves an opportunity to actually do something.

And I personally had this idea in my head that I could not work out unless the hubby was home to look after Chewie – because, what would I, what else would I do, like I can’t do it when he’s awake and you know his sleep schedule is quite erratic still like he will just nap when he feels like it.

And so I couldn’t plan what I was doing and if you know me, you know I like a plan

And so I pretty much didn’t do anything, I mean I tried to walk when I could and now that we can take him out for more walks because he’s almost fully vaccinated, you know those walks are pretty pretty awesome.

But I had this idea in my head that I just couldn’t work out unless the hubby was home and could play with him, sort him out, look after him and just make sure he doesn’t break anything, that kind of thing.

And then I figured you know what, that’s a stupid little rule I’ve made up in my own head. Over the weekend I grabbed my heaviest kettlebell in the gym, I took Chewie into the gym, tied him to the kettlebell and did a 16 minute workout. So I was in and out within 20 minutes including a little bit of a warm up.

I’m sharing this example for two reasons, number one: even though I record this podcast and I coach people on letting go of the rules, being less of a dick to themselves and getting curious – I still navigate the same stuff OK?

It’s a practice, it’s a skill to question these things, and it takes practice, it takes repetition – and it never stops.

And I said there was 2 reasons but I think I actually inadvertently put the second reason into the first one, which is that this is a practice OK?

It’s awesome when it works or when we realize, yeah, this is a great thing to be doing, like tying my puppy to a kettlebell.

But equally, if he had hated it, was barking the entire time or just didn’t have a good time – it would have been OK to stop it ’cause I was trying it at least right and that’s where again, this whole concept of lowering the barrier comes in right because it is about lowering the concept, the idea that you have in your head of what something has to look like.

Making it easier doesn’t necessarily mean that it isn’t still fucking hard. It just means you’re making it easier for yourself to start or to take some small action, because you’ve, instead of making it a big thing in your head, you’ve made it multiple small things, for example, right?

So that doesn’t mean taking it altogether – shit isn’t hard.

But by breaking it down you’re making it a little bit easier to keep going or to start.

I want to point out here, by the way, that making something easierf or yourself, lowering the barrier for yourself – celebrating good enough when that’s all you were able to do that day?

None of those things mean that you’re complacent.

Society will have you believe that it does, and that discipline is the way to achieve everything.

But I say fuck that shit. Because what lowering the barrier actually means (and obviously this is my lens, my opinion here), but what it means is that you are starting to figure out how you operate, how you want to go about achieving your goal or living your life.

No, it just means that you want to figure out what that all looks like for YOU and do it at your own pace in your own way.

I think that’s aside from lowering the barrier and making it work for you, that’s the other little lesson in this episode, is that multiple things can be true, it isn’t a binary.

You can have drive, you can want to achieve something AND you can do it at a pace that works for you, that might well be different to what you see everyone else do. But that’s OK.

Because you are doing what works for you.

If what I’ve talked about in this episode resonated with you, but you’re not entirely sure how to make this happen in your life, then I invite you to go to the show notes, head to my website and check out my coaching packages, because this is a core of what I help my one on one clients with. We work on figuring out what less than perfect is, what good enough looks like, what other rules you may have showing up in your life What the inner critic keeps trying to tell yourself and we work on re framing and rewriting a lot of those things so that you can achieve your goals and go about your life while being a bit less of a dick to yourself.

I currently have spots open for one on one coaching, but I also have my group coaching program making a return later this year in a couple of months so you can also check that out on my website.

I’ll put the link in the show notes to that as well and you can add your name to the interest list so that you can find out when enrolment is getting closer.

I hope you this episode helped you, if it did, I would love it if you could share it with a friend or share it on social media, tag me or leave a review on Spotify or iTunes or wherever you listen to podcasts, because that helps other people find the podcast, and that means more people can start to question the stupid rules because they are made up!

Thank you for listening and I’ll chat to you next time.