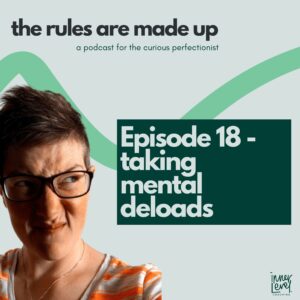 Tune into Episode 18 – Taking Mental Deloads right here in your browser, find it on your favourite platform (head here for the links) or keep reading for a transcript.

Hi, hello and welcome to this episode of the Rules Are Made up I am definitely living the made up part of the rules today, or those I create for my own because I’m recording the sitting on the couch with my phone as opposed to in my office with my fancy set up because I’m navigating a bit of a flare up.

And so I’ve got the puppy next to me, cup of coffee in front of me and we’re just going to chat like this.

My brains not even trying to force me to go into the office, we’re just gonna we’re just going to go with it OK? So if the sound quality is a bit meh, so be it. And if the puppy wakes up and make some, make some weird noises, so be it. That’s just got, that’s just how it’s going to be today.

Anyway, what I wanted to chat to you about today is a specific concept that I’ve been applying in my own life and especially over the last week or two, but it’s also something I’m working on with some of my clients or it’s come up in my coaching and it’s this concept of, I guess like a mental deload week.

So I’m sure a lot of us are familiar with a deload week in the context of strength training or lifting, right? In case you’re not, a very rough summary (I’m sure my trainer friends will be able to correct me here) but a deload week is basically if you follow a structured lifting program, at some point there’s usually a deload week in there where you purposely do a lower volume, like less weights, lower intensity but you still you still provide your body stimulus, you just don’t go hard out, right? You purposely lower everything to give your body a chance to you know, to further recover to further rest and to do a mini, it’s almost like a mini reset, but just to not continuously hammer your body right?

Because our bodies need to recover and our brains are no different, right?

And so there’s this concept I guess of like the mental deload where you might purposely not keep adding stuff on top of your plates, right?

You’ve already, say you already have 3 balls spinning in the air, you’re not going to add a fourth one, or even a fifth one, on purpose. Even though you maybe you think you could, you’re actually on purpose, doing a little bit less for a certain period of time, or just not adding something.

I’ve seen this in my own coaching ’cause I still work with a coach and not having been, you know, after my check-in I didn’t get anything to do for this coming period because I’ve also got uni things going on, I’ve got some busy work stuff coming up, so trying to add more things for me to like, for my brain to try and wrap its head around or to work through a particular activity. We’re like, you know what I’ve got a lot of stuff going on already, no need to do that, we can do that in the check in after.

Same thing I’ve noticed with some of my clients, they’ve either been doing freaking fantastic and there isn’t, you know, there there’s no need to keep pushing into a particular thing or even where they you know they they’re still navigating some challenges, sometimes we’re better off actually spending a bit more time there, or really putting in the reps right for the particular thing that we’re working on to keep digging or to keep working away at it because we’ve also got so many so much other stuff on that it’s actually less conducive to growth to keep trying to work on more things.

Actually, I mean yes, right, yes, but – I also, like the value isn’t just in giving someone more activities to do every week right, the value is also helping them really practice and hone in on a particular thing. To really practice a particular skill and to show them that they don’t have to keep doing shit over and over, like all the time right to actually also help them realize that it’s OK that you don’t have to keep adding stuff.

Because as we all know, even though we like to think that growth is this linear, you know you start in the top, bottom left and then you end up at the top right if it was like a line graph.

We all know it’s this massive spaghetti bowl, right where you start in the bottom left, then it’s a bowl of spaghetti and then maybe sometimes you might be in the top right, but maybe you’re also just somewhere else entirely, and that is A-OK.

And this concept of a mental deload is part of that right, it doesn’t mean you’re purposely making spaghetti, but it just means you’re actually letting, you’re giving yourself time and the headspace to implement something right to practice something.

Just like in the gym, you have to practice, you know with lighter weights or higher reps to be to build up strength, to be able to start lifting heavy. With a lot of mind management skills, mindfulness skills, a lot of the stuff that you know I could help you with – you also have to put in the reps, right?

It’s not like we talk about letting go of perfectionism once and you’re like “got it Neens, cool what’s next?” right?

And as much as you know, we probably both want to give you stuff every week so that you can keep working away at it, sometimes taking a deliberate pause so that you can focus on one or two skills might be what you need to make a breakthrough or to really have a shift that goes “Oh yeah shit, this has really, you know, this has come up for me so many times and I’ll finally realize something”.

Right, it doesn’t mean you have to do these mental deloads all the time, right?

You could do them sparingly and even if you’re not working with a coach, I would encourage you to you know, have a bit of a think if you’re going after anything, after a goal or if you’re working towards something right now.

And instead of continuing to add, could you maybe just keep working on the things that you’re currently working on? Just a thought.

Obviously you can always reach out to a coach and it doesn’t have to be me, but just do a bit of an audit and see where you got to.

As hard as it is to accept sometimes (speaking from experience), taking a bit of a deliberate break, or even sometimes deliberately taking something off your plate – might be exactly what you need, to keep to really hone in and practice the skill that will actually shift the needle for you a little bit.

Obviously, if you want some help with that, details on how you can work with me are in the show notes.

I’m going to leave it here for this week’s episode and I hope you’re having fab day, a fab week and I’ll chat to you soon.

Until then, stay curious!

Links for you:
Have a peek at my 1:1 Coaching Packages – I have 3 openings at the moment.
Email me or connect with me on LinkedIn, Instagram or Facebook