19 – WTF is self-discovery and why should I care 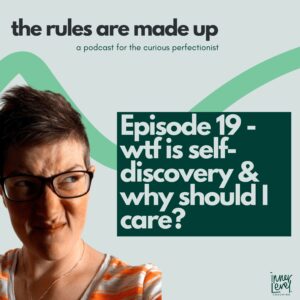 Tune into Episode 19 – WTF is self discovery and why should I care? right here in your browser, find it on your favourite platform (head here for the links) or keep reading for a transcript.

Hi, hello and welcome to this episode of the Rules Are Made Up.

Today I want to talk about the concept of self-discovery and you might be wondering “Neens that sounds like a fancy schmancy buzzword, what the fuck are you talking about?”

And if that’s you then this episode might be for you.

Now self-discovery might well sound like a buzzword and maybe it even is and heaps of people are starting to throw it around like it’s nothing, but I actually really think it’s a cool, interesting concept and work that you can do and the journey that you can embark on and all of the things right.

In terms of what it is, it’s pretty self descriptive – it’s about you discovering more about yourself, right, I often like to explain it as you working on getting to know yourself just like you would with you know another person, maybe not as intimately as self-discovery actually is but it is a way for you to meet yourself right to find out things about yourself that you may have thought were obvious, but maybe they aren’t or there’s stuff going on that you don’t even know because you’ve never paid attention to it because you’ve never needed to pay attention to it.

Or maybe you’re just freaking curious and you want to find out what makes you tick, right?

That’s the kind of stuff that self-discovery means to me it’s that that inner work, right, which is what we do a lot of here at Inner Level Coaching.

But it’s finding out what your values are right and actually doing some work on really honing in on what is important to me and what isn’t, right, because society and culture and like our environment – so many things influence our thinking that often times until you pay deliberate attention to that thinking you, as silly as it sounds, you don’t even know what you’re thinking because you don’t know if it was actually you that decided that this is important to you if it was something that’s just always been important to your parents, your family, your circle of friends- but actually is it important to you?

Even on the surface level, sometimes you might go “Yeah, actually it is”  but then the deeper you dig, the more you might find out that actually, maybe “no, no, this isn’t me, this isn’t me.”

Like it let me illustrate this with a top of mind personal example:

When I decided to start Inner Level Coaching, I wanted to focus on the inner work, right – there’s a reason the word ‘inner’ is part of the company name.

And then when I really started and I started to put things out there, I thought and no one actually told me to do this right, but I had this thought, this belief in my brain that I had to include nutrition coaching as part of it. Maybe it was ’cause everyone was doing it, maybe it was, you know, I did have an interest in it I’m not going to lie. I do, you know, I find what our bodies can do, not just our brains, but our bodies can do that shit fascinates me.

Right, but I thought it was an important thing to do. And I wanted to, you know, I’ve really tried to do it and to portray that that those are what I can help people with. And it wasn’t until later, I think it was in 2020 I want to say, that I actually did some thought work, I did some digging in and did some discovery.

And I figured out that hold on I actually, this isn’t me. I don’t want to help people with this. I don’t want to coach other people… not even that like whether it was weight loss or weight gain or whatever, I just didn’t have the drive to help others with their nutrition.

I wanted to focus on what was going on in their brains and you know, sometimes maybe there is something you know when I work with a client where we might talk about food and stuff like that and I still have, you know, the education to be able to do that, but I didn’t. I realized that I didn’t want that to be my focus, but I didn’t know that until I did a lot of discovery work to actually really figure out who the fuck I am as a coach, and who I want to be as a coach.

And that is what I mean when I say we need to get to know ourselves ’cause I thought I was doing XYZ, but actually I didn’t want to do Y&Z just wanted to do X, you know?

Like self-discovery often involves getting to know your beliefs, digging into that a little bit, digging into thought patterns, trying to understand what things might be or what people or what situations might be influencing you and your thoughts because they influence your actions.

If you’ve gotta live life on autopilot, that’s OK. But if you’re in a place where you’re like “actually I’m not a fan of Autopilot anymore, I want to do some deliberate mind work, I do want to learn how to manage my mind, I do want to figure out how to start to tweak some of what I’m thinking and doing”, then self- discovery is a good place to start.

I argue it’s a vital part of a deliberate growth journey, right because if you want to change, if you want to grow and evolve as a person you kind of need to know what your baseline is, and again, that’s where self discovery comes in.

Of course, that that is a big part of what I can help you with in my 1:1 coaching and the info to that is always in the show notes if you want to go and check that out, but considering I’m recording this episode in early June, I do also want to take this opportunity to let you know, that The Inner Compass is making a comeback later this month with enrollment opening later in June and then the program actually starting in early July, the 11th I think – I should know that off the top of my head by now but it escapes me at this point in time, but the info will be in the show notes and there will be a link to the sales page as well.

If you’re wondering what the Inner Compass is, it is an 8 week group coaching experience for the overthinkers, the perfectionists, the worriers, the catastrophisers – all the people that get stuck in their own head a lot and are being dicks to themselves and want to learn how to do that a little bit less so they can still achieve their goals and navigate life.

Now when I say group coaching experience, what I mean by that is that the Inner Compass is a hybrid between an online course and a group coaching program.

So in terms of a course there will be prerecorded modules, there will be work books and additional resources like podcasts or articles or whatever that you can work through in your own time, but then there will also be 6 live group coaching calls as well as ongoing chat support throughout the 8 weeks.

The coaching calls are there to get to know each other as the group, but to also share our challenges, share our wins, encourage each other and for me to coach the students, the participants on whatever it is that they’re working through. It is a really cool program if I do say so myself and I would love to invite you to go and check out the sales page, it’s in the show notes and the link for enrolment will open later in June.

If you’ve got questions, you can always email me or message me wherever we’re connected on social media and I want to thank you for tuning in today and I’ll chat to you next time.

Until then, stay curious.