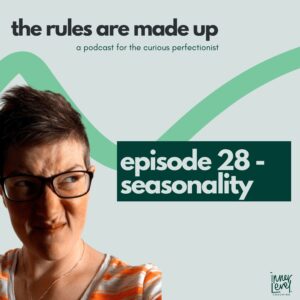 Tune into Episode 28 – seasonality right here in your browser, find it on your favourite platform (head here for the links) or keep reading for a transcript.

Hi, hello and welcome to this episode of the Rules are made-up.

To be honest, this is a bit of an impromptu one. I hadn’t actually sat down to plan what my next few episodes are going to be.

And as per the moment today, decided to record this one and.

What I was going to talk about is actually somewhat related to the bit where I said that I haven’t really sat down to plan any episodes over the next wee while, and so I’ve actually made the decision not to stop.

But to introduce seasons to the podcast, I had originally thought, I’ll just keep recording them and, you know, maybe there’s a couple of breaks here and there.

I started out weekly.

It’s moved to sort of every couple of weeks.

But I am finding that with giving attention to my existing clients work.

Some other projects chewy.

The hubster. I am Not spending as much time planning content like I probably want to be able to, but I’m also noticing that with this season that I’m finding myself in personally.

In terms of what’s going on around me that.

As much as we sometimes have to do the things that we don’t want to do because they’re still worthwhile doing.

This isn’t one of those things where.

You can just push through, you know, like you start with the warm up for work out and then you end up doing the entire thing.

This doesn’t really feel like one of those things and I do not them.

I try to not make this perfect.

And make sure that.

You know it is a good experience for those of you listening and so.

Actually going to take some time to figure out what the seasons are going.

But what I can say is that.

There probably won’t be any episodes.

During September, maybe even end to October, just because I’ve got a couple of busy weeks coming up with work.

Essays due over the next few weeks and months.

And so I want to give myself the hit space to focus on those things.

Instead of spreading myself.

But while we’re here.

I think it is worthwhile talking about the fact that we all have.

Seasons in our lives.

I think we all have seasons, you know, where we push ourselves.

We really try and step out of our comfort zones.

That could be, you know, whether it’s.

Deciding we want to run a particular race or train for a particular event, or whether it’s taking on a new role or getting a promotion or actually changing, you know, jobs completely, whether that’s, you know, becoming a parent of a human baby or a fur baby.

There are lots and lots of different.

You know you can apply this to different things in different contexts, but.

Maybe not surrender entirely, but we need to.

You know, we give need to give ourselves more grace, more space.

And just be gentle and kind, though with ourselves and.

But, and maybe I could, you know, if I actually took time to sit down and figure out what my episodes are going to be, I could probably batch them and.

You know have episodes out the wazoo, but.

I’m not in that headspace at the moment and.

As much as I’ve said earlier, there are times when you need to just start, lower the barrier and figure out a way to start.

There is also something to be said about realizing when not to do that and it’s a ******* hard balance or I’m not saying that it’s easy.

But we don’t always have to push.

We don’t always have to.

Try and figure out how to make it all work.

For a little bit I need to pull back and I’m not.

I recorded an entire episode on that a few weeks months ago that I’ll link in the show notes that you can go back to if you want to.

It’s OK to to not have altogether.

This will be if you, if you need to get, need, need to take away from this episode.

That there was a weird way to put that.

We’ve got lives where **** happens, whether that’s actual, you know, crappy stuff or exciting things.

And those things mean that sometimes our plans change or our approaches to certain things change.

Our part of life.

Whatever season you find yourself in.

And it’s totally normal that some of those seasons sometimes mean going slower and pulling back, and sometimes it means pushing ahead.

And working through the discomfort that comes along with that.

That’s all I’ve got for you in this impromptu Shorty episode, so as always, thank you for tuning in and I’ll catch you next time.

Until then, stay curious.